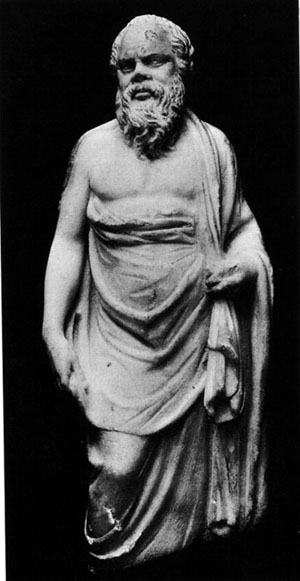 “How you, men of Athens, you have been affected by my accusers, I do not know (οὐκ οἶδα). I, at any rate, almost forgot (ἐπελαθόμην) who I am—so convincingly (πιθανῶς) did they speak. And yet there is hardly a word of truth (ἀληθές) in what they have said.”

“But I was most amazed by one of the many lies that they told–when they said that you must be on your guard not to be deceived (ἐξαπατάω) by me, because I was a terribly clever (δεῖνος) speaker. To have no shame (αἰσχύνω) at being directly refuted by facts when I show myself in no way  clever (δεινὸς) speaker that, I think, is the very height of shamelessness. Unless, of course, they call a man a clever speaker if he  speaks the truth (ἀληθής). If that is what they mean, why, I would even  admit to being an rhetorician (ῥήτωρ) — though not after their fashion. Now they, as I say, have said little or nothing true; but you shall hear from me nothing but the truth…

… I make this request of you, a just one, as it seems to me, that you disregard the manner of my speech–for perhaps it might be worse and perhaps better–and observe and pay attention merely to this, whether what I say is just (δίκαιος) or not.”

“For that is the virtue of a judge (δικαστής), and an orator’s (ῥήτωρ) virtue (ἀρετή) is to speak the truth.”

“Oh, men of Athene! First then, it is right for me to defend by speech (ἀπολογέομαι) myself against the first false accusations (ψευδῆ κατηγορημένα) brought against me, and my first accusers; and next, against later accusations and later accusers…

…“But those others are more terrible (δεινότεροι), Oh gentlemen!, who gained your belief, since they got hold of most of you in childhood, and accused me without any truth, saying:

“There is a certain Socrates, a wise man  (σοφὸς ἀνήρ), a ponderer (φροντιστής) over the things high in the air, investigator of the things beneath the earth and making the weaker argument the stronger (ἥττω λόγον κρείττω ποιῶν).”

These, Oh men of Athens! who have spread abroad this rumor (φήμη), are my terrible (δεινοί) accusers, since their hearers believe that those who inquire into such things acknowledge no gods…”

DEFENSE AGAINST THE CHARGES OF THE FIRST ACCUSER (19a8–24b2)

“Socrates is a criminal/unjust (ἀδικέω) and a busybody seeking the things beneath the earth and in the heavens (ὑπὸ γῆς καὶ οὐράνια), and making the weaker argument stronger (ἥττω λόγον κρείττω ποιῶν ) and teaching (διδάσκω) others these same things.”

“Who has knowledge (ἐπιστήμων) of that virtue (ἀρετῆς) which belongs to a man (ἀνθρωπίνης) and a citizen (πολιτικός)?”

“The thing is, Oh men of Athens, that I got this name through nothing but a  kind of wisdom (σοφία). What kind of wisdom is this? Perhaps some kind of human wisdom (ἀνθρωπίνη σοφία), for there is a  chance, that I am wise in this.”

The Delphic Oracle Story: The Pythian Testimony and the Riddle of Apollo

Chaerephons bold question: whether anyone is wiser than Socrates?

“Now, the Pythia replied that no one is wiser (μηδένα σοφώτερον εἶναι)”

“When hearing this, I pondered in my heart. What the God says, what is behind this riddling speak (αἰνίσσομαι)? For I am sure (σύνοιδα) that I am not wise either much or little. What then does he mean by declaring that I am the wisest? He certainly cannot cheat by lies (ψεύδω), for this would be against the divine law (θέμις) itself. And for a long time I was at a loss (ἀπορέω) as to what he said; then with great reluctance I proceeded to examining (Ζήτησιν) it him somewhat as follows.”

1) The popular wisdom of the politician

“I went to one of those expected (δοκούντων) to be wise (σοφός) thinking that there, if anywhere, I might disgrace (ἐλέγχω) the oracular response and show the oracle: “This is wiser (σοφώτερος) than I, but you said I was.” So examining (διασκοπῶν) him — for I need not call him by name, but it was one of those political (πολιτικῶν) men which gave me this affect in discussion, Oh men of Athens, this man seemed to me to seem to be wise to many other people and especially to himself, but was not so. And then I tried to show him that he thought (oἴοιτο) he was wise, but was not. As a result, I became hateful (ἀπάχθομαι) to him and to many of those present.

As I went away, I thought to myself, “I am wiser (σοφώτερος) than this man; for neither of us really knew (εἰδέναι) anything beautiful (καλόν) and good (κἀγαθόν), but this man thought (οἴομαι) he knew (εἰδέναι) something when he did not known (εἰδώς), whereas I, as I do not know, do not think I do (ἐγὼ δέ, ὥσπερ οὖν οὐκ οἶδα, οὐδὲ οἴομαι)

I seem, then, in just this little thing to be wiser, that what I do not know I do not think I know either (ὅτι ἃ μὴ οἶδα οὐδὲ οἴομαι εἰδέναι).

From him I went to another of those who were reputed to be wiser than he, and these same things seemed to me to be true; and there I became hateful both to him and to many others. After this then I went on from one to another, perceiving that I was hated, and felt grief and fear because of it, but nevertheless I seemed necessary to put God first and so I had to go on, examining the oracular response from all, who seemed to know. And by the Dog, men of Athens — for I must speak the truth to you—this, I do declare, was my experience (ἔπαθον) as I carried on  inquiry in behalf of the God, that those most highly esteemed (εὐδοκιμέω) seemed to me to be almost the most deficient (ἐνδεής) and that other men reputedly inferior (φαυλότεροι) were more reasonable (φρονίμως). So I must relate to you my wanderings, the hard laboring labors I performed, in order that the oracle might be proved to be irrefutable.

2) The inspired wisdom of the poets (ποιητάς)

From the politicians I went to the poets—tragic, dithyrambic, and the rest thinking that there I would be caught as less learned than they.  So, taking up the poems that seemed to me to have been most carefully elaborated (πραγματεύομαι) by them, I asked them what they meant, that I might at the same time learn something from them.

Now I am ashamed to tell you the truth, Oh men, but still it must be spoken. There was hardly anyone present who could not speak better than they about the poems they themselves had made.

Soon I realize (ἔγνων) that poets too do not make what they make by wisdom (οὐ σοφίᾳ ποιοῖεν ἃ ποιοῖεν) but by something natural (φύσει) and by the same enthusiasm  (ἐνθουσιάζω) as divine seers (θεόμαντις) and chanting oracles (χρησμῳδοί). For these also speak many beautiful things, but know nothing of what they speak. I realize that the poets too had undergone same kind of affection (πάθος) .

I realize that the poets too had undergone same kind of affection (πάθος) and perceived that because of their poetry they thought  themselves the wisest of men also in other matters—and were not. Once again, I left thinking myself superior (περιγίγνομαι) to them in just the way I was to the politicians. 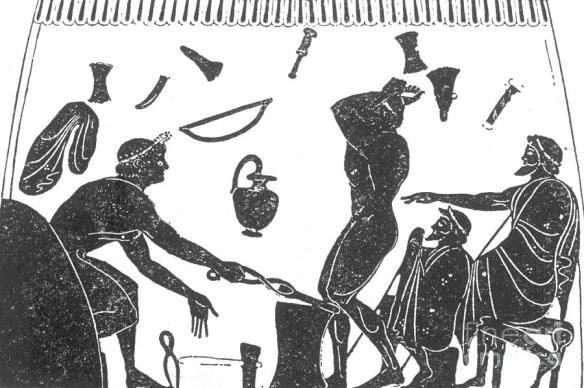 Finally then I went to the craftsmen (χειροτέχνας) being aware (σύνοιδα) that although I did not know scarcely anything, I would find that they knew and had much fine knowledge. In this I was not deceived; for they have knowledge that I did not, and in this respect were wiser.

But, Oh, Men of Athens, it  seemed to me that the poets and our good handicraftsmen (ἀγαθοὶ δημιουργοί) had the very same failing (ἁμάρτημα); because of working out his art (τέχνη) well, each one thought he was very wise in the other great matters, and this folly of theirs obscured their wisdom.