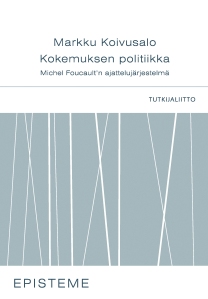 “Maybe as a first in Finland Koivusalo digs up the real philosopher Foucault” (J. Kurki: Foucault-philosopher and the Diamond in the Rough. Science and Progress 3/2012)

“The book is undeniably the best Finnish study on Foucault’s thought” (J. Vähämäki: The Politics of Experience in Finnish Year Book of Labor Studies 1012)

“This is exceptionally interesting and original reading of Foucault.” (prof.Hänninen)

Tables of the Book

The Riddle of Sphinx  /   Kant and Foucault

The Politics of Experience. Michel Foucault’s System of Thought

The Politics of Experience. Michel Foucault’s System of Thought is a comprehensive enquiry into the structure and the historical conditions of Foucault’s thought from the perspective of political reason. According to its thesis Foucault’s main question is identical to the classical question of political philosophy: what are the modes of historical reason governing human action. However, the question is raised from the post-Kantian critical perspective and dealt with exploration of the historical conditions of possibilities of experiences.

The study confirms Foucault as a systematic thinker of truth and freedom and claims that his main problem is the relationship between truth and politics as historical experiences. This thesis is supported by close readings of Foucault’s ways of questioning in his historical enquiries, together with a comparative reflection on other thinkers from the angle of these specific historical problems.

The methodological stakes of the work are twofold. First to follow Foucault’s own approach by folding his way of questioning towards his own historical system of thought and investigating what is its own structure, what are its own historical limits and conditions of possibility. Secondly, on the basis of this reading, the study asks what would be the possibilities for a political philosophy that would neither be moral philosophy nor empirical science of politics, but would continue critically to question the concrete modes of political reason and to explore the relations between truth and politics without reducing one to the other.

The book includes six articles. The first investigates Foucault’s archaeological critique of knowledge, the second his strategic analysis of power and third his ethical critique of governmentality. The next two articles examine the theme of death of man and modern concept of human in relation to the modern scientific, artistic and political experiences. The last article reflects on the relationship between violence and life.

The articles are preceded by an extensive encyclopaedic introduction to the critical political anthropology of Foucault. The introduction gathers together the phrasing of questions in other articles and links Foucault’s thought to the three critical questions of Immanuel Kant’s philosophy: What can I know? What should I do? What can I hope? It also places Foucault’s thought in relation to Kant’s view of philosophy as system (Schulbegriff) and a science of the ultimate ends of mankind (Weltbegriffe).

In addition, there is an appendix, where the approach of the study is differentiated from other approaches (especially from some hegemonic Anglo-Saxon receptions of Foucault), they are argued against and the particular approach and methodology of this study are defended. 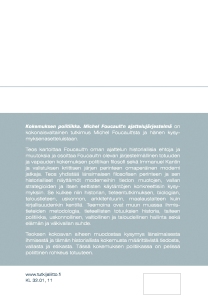 Buy the book from